Art Deco Design evolved during the first three decades of the twentieth century, but it was the 1920s which saw the birth of graphic design as a profession.

There was a massive boom in the advertising industry, led by the mass production and mass consumerism of the post war years.  Although there were commericals on the radio which was increasingly popular, posters and magazine advertising were the main means by which producers reached the public.

Poster design, which had been a sideline for artists in the past, such as Matisse, Chagall, Toulouse Lautrec, made up almost the entire output of many artists in the 1920s and 30s.

Poster art, which in its infancy had been rather boring, became an art form in itself.  Many artists of the Art Deco period would be forgotten now, if it were not for their poster designs which have become icons of the Art Deco age.

The printer's art had developed to such an extent that by the 20th century it was common for major artists, such as Matisse, Picasso, Chagall, Kandinsky and Arp to use the printing medium as a form of expression equally as valid as painting or sculpture.  Etching was popular amongst the Cubists, while other arts used various forms of lithography or monotypes which are more desirable today as they were generally "one-offs".  Lithographs produced by famous artists would be in limited editions with every print signed by the artist, usually in pencil.  Some of these, even by big name artists can still be quite affordable today.

The pochoir technique of hand colouring lithographs were used to produce the best fashion prints ever seen.  Many were printed in catalogues and magazines, which are very rare in their complete form today, as they are taken apart and sold as individual prints.  These are very desirable for their quality and beautiful Art Deco design.

Art Deco graphics designers incorporated many bold new typefaces, which contributed to the unique style of Art Deco design.  San serif, or without adornment was the name given to the style of typefaces popular in the Art Deco period.  The first Sans serif typeface "Railway" was designed for London Underground in 1918 by Edward Johnson.

The well-known Bauhaus "Universal" of 1925 by Herbert Bayer had no decoration and no capital letters.

But in the Art Deco graphics of 1920s France, some decorative elements remained, such as thick and thin, or decorative shading. In Cassandre's Bifur of 1929, the letters are nearly unrecognisable apart from the grey areas. 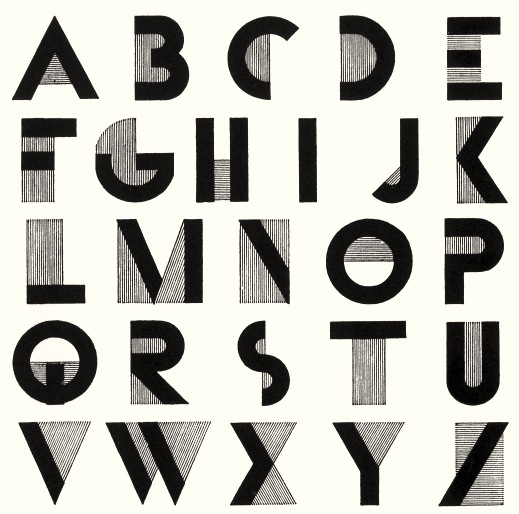