Discover the world of Art Deco furniture - the different styles, shapes and designs. . . . .

Are these bar stools below the style that first springs to your mind?

These are the later machine age inspired designs of the 1930s when new materials such as chrome and steel became all the rage.

But that's not how it all started. 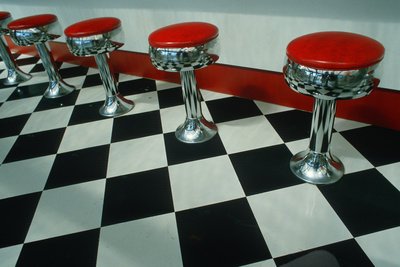 Some of the most collected furniture today was made by the first Art Deco interior designers, who took their inspiration from the 18th and 19th century cabinet makers of Paris.

Their elegant pieces of fine craftsmanship were first seen at the 1925 Paris "Exposition Internationale des Arts Décoratifs et Industriels Modernes" from which Art Deco got its name. 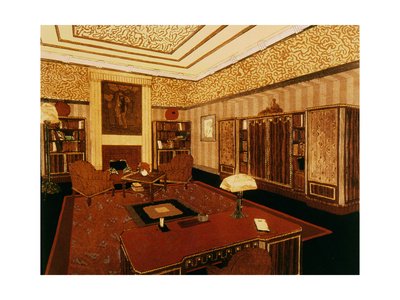 Pieces by these designers are finding their way now into museums, and the collections of the international elite. The following print is of a gilt bronze and rosewood daybed by Ruhlmann. 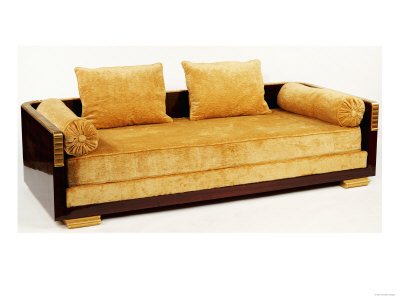 Print of Day Bed by Ruhlmann

Other collectable Paris designers in the “artiste decorateurs” tradition include:

Pierre Legrain – made furniture with a strong African influence

Armand Albert Rateau – influenced by the Egyptian and the exotic and often used Bronze.

Eileen Gray - a reclusive Irish lady who established in Paris.  Her lacquered wood furniture and tubular pieces were sold in her own Galerie Jean Desert from 1922 – 1930. 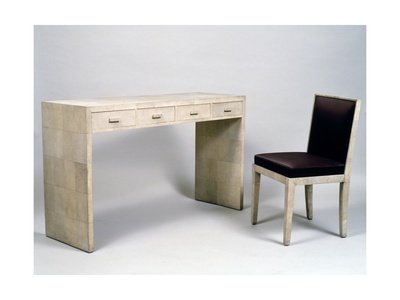 Desk and Chair by Jean-Michel Frank

In Britain the few designers who worked in the high end Art Deco style included:

Betty Joel - her feminine Hollywood inspired pieces attracted elite clients from the British Royal family and classy hotels such as the Savoy.

1920s French high end Art Deco furniture was made from the most fabulous woods such as ebony and burl walnut, maple or ash.

Towards the end of the 1920s ebony and other exotic woods were becoming scarce and exotic veneers from overseas such as Brazilian jacaranda, zebra wood, palmwood, and calamander.  Other veneers such as sycamore, amboyna, mahogany and violet wood were also popular.

Inlays were of ivory, brass and mother of pearl.  Pieces were finished with shagreen, (a type of sharkskin which was ideal for dressing table or desk tops) snakeskin, oriental silks, pony skins and other animal hides such as those used by Le Corbusier in the chaise pictured below.

Wrought iron and glass were just some of the other expensive materials used by such designers as Edgar Brandt and Charles Picquet for architectural elements and lighting.

Art Deco furniture was always polished to a very high sheen which gave it it's brilliance.  Japanese lacquer was often used to achieve a very hard and shiny, tactile finish.

Eileen Gray, an Irish furniture maker who settled in Paris, went overseas especially to learn oriental lacquering and her furniture was highly sought after.  But the lacquering process involved up to 22 layers of lacquer applied in a painstaking process, which made it too expensive for most.  It was largely replaced by the 1930s by the advent of synthetic varnishes.

Art Deco furniture of this quality was not made a great deal outside Paris. Department stores such as Galeries Lafayette started to stock luxury furniture, so that it would be more widely available, but this highly opulent style didn't really take off outside France.

Exceptions to this were a few stores in Britain such as Heals of London and Gillows of Lancaster who stocked high quality imitations.

Many of the Art Deco furniture makers were more than just cabinet makers.  They designed entire interiors for their wealthy clients.  Some were also architects, and built houses with the interiors already thought out and furnished. 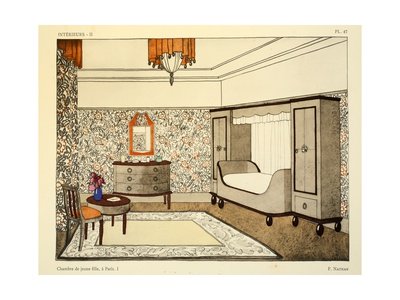 A few British designers were influenced by high end Art Deco such as the Epstein Brothers and Ray Hille who used walnut and veneers, but it was only in the 1930s when mass production techniques and cheaper materials became available that Art Deco became a style for the middle classes instead of just the aristocracy and the fabulously wealthy. 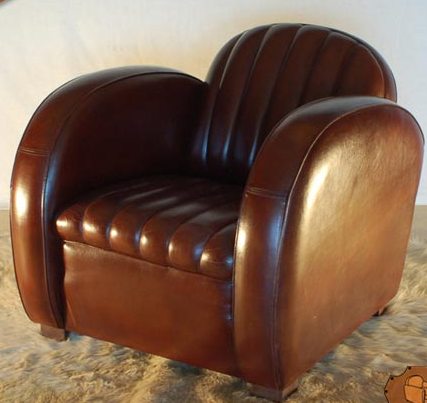 Photo by Didouner via Wikimedia Commons

By 1930 Art Deco furniture had reached the USA, and stores were filling with a more modernist style of furniture with a streamlined look.  Donald Deskey, who designed the interior of Radio City Hall, created hundreds of accessible furniture designs for department stores which made their way into the homes of ordinary people.

Paul Frankl was making an affordable range of skyscraper  furniture in Manhattan inspired by the ever rising skyline of New York.  He catered for the new high rise apartment dwelling trend setters, and his pieces were in black and red, steel and chrome, and essentially the forerunners of clever, space-saving modular furniture.  His pieces are making a fortune these days!

Read more about Paul Frankl furniture in this excellent book by Christopher Long:

In the 1930s, especially in the USA, modernism from the Bauhaus school and architects such as Le Corbusier and Mies van der Rohe took over.

There was also a strong influence from the architect Frank Lloyd Wright whose furniture as early as 1908 was highly prescient of what was to come.  Lloyd Wright's barrel chair of 1908 looks like pure Deco!  See what it looks like here.

A few other countries had their Art Deco furniture designers which are now highly collectable.  Many Scandinavian designers used pale curved plywood, which was a new technique for the 1930s, and was the beginning of a uniquely Scandinavian furniture style.  In Finland, the husband and wife team Alvar Aalto and Aino Marsio are collected today for their curved and streamlined, or geometric laminated Birch furniture.

If you would like to find out more about Art Deco furniture and its designers, I suggest you do a search for Art Deco Complete by Alastair Duncan, or Judith Miller's Art Deco. Both contain lots of fabulous photographs and information on the different national styles of Art Deco furnishings.

There has been a resurgence in the popularity of 1930s Art Deco furniture recently in Europe, the USA and Australia.  Design classics such as the Le Corbusier chaise and the Mies van de Rohe Barcelona chair are still being reproduced and even sold in miniature versions as ornaments!  I saw the Le Corbusier chaise in miniature being sold for 300 British pounds on a home décor show the other day! 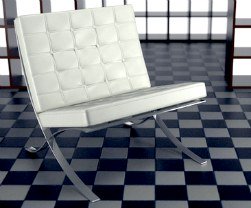 New Art Deco style furniture is being built now by some high quality craftsmen, with streamlined looks, dark woods and pale upholstery.  It has a feel of Hollywood glamour with shiny polished woods and curved form.

Another trend I've noticed recently, which owes it's inspiration to Art Deco is mirrored furniture with chrome accessories. Some of it is really so over the top it's a must have item for a high bling factor!

Have a look what's available on Etsy in Art Deco Furniture!

Don't be afraid of looking further afield than your local area. Sometimes delivery is not as expensive as you might imagine.

To find out more, why not read up on How to Buy Art Deco Furniture.