A few of the major Art Deco Glassmakers active in the 1920s and 1930s are described on this page.  They produced pieces still highly sought after today. 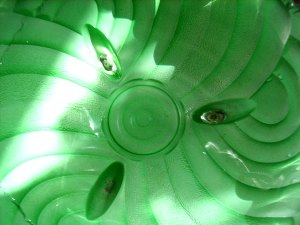 Gabriel Argy-Rousseau (1885-1953). Famous for his works in the "Pâte de verre" technique, he formed a partnership with Moser-Millot from 1919 until 1931.  He made a series of Art Deco glass enamelled perfume bottles, and many vases, lamps, and bowls, as well as jewellery.

Baccarat.  This long established French glassmakers was a major competitor of Lalique and Emile Gallé during the 1920s and 30s.  They made perfume bottles for all the major perfumers, and shared a stand with the Art Deco gold and silversmith Christoflé at the 1925 Paris Exhibition.  Their perfume bottle for Guerlain's L'Heure Bleue of the time displayed a label with the famous Art Deco fountain motif, very similar to the "fountain of perfume", Lalique's crowning glory of the perfume pavillion. Their work of the time employed geometric motifs, enamelling and angular shapes.

Carder (1863-1963).  British born Frederick Carder worked for various potteries and glass companies before departing for the United States in 1903. He was a highly talented and innovative glassmaker and was still developing new colours and techniques when he retired aged 96. He founded the Steuben Glass Company in New York where he produced French style high Art Deco pieces which competed with Tiffany.  He developed bright iridescent colours and produced over 6000 different shapes during his long career.

Daum Frères.  Founded in 1875 in Nancy, this French Glassmakers produced an enormous amount of fabulous Cameo glass in the Art Nouveau period.  In the 1920s and 30s their Art Deco output was headed by Paul Daum, and consisted mainly of thick, heavy etched pieces in grey, turquoise, yellow and sea green with either geometric or floral designs.

François-Emile Décorchement (1880 - 1871).  Noted for his work in "Pâte de verre" and "Pâte de cristal", Décorchement developed a marble-like, thick-walled glass, using colour streaks obtained by the use of chemicals.  He made almost transparent pieces with stylised floral motifs.  Post World War I he made bold, rigid cuboid forms with geometrical decoration.  He finished his career working mainly in stained glass for churches.

Edmond Etling.  The Paris factory of Etling et Cie was active in the 1920s and 1930s.  Etling figures of draped female nudes, animals and ships made of opalescent glass were mass produced in the 1920s and are the most collectable of his work today.

Maurice Marinot (1882 - 1960).  A painter and a member of Les Fauves, Maurice Marinot became fascinated with glass and produced over 2500 vases, jars, bottles and sculptural figures until 1937 when he went back to painting.  He made all his pieces by hand, using coloured enamels, as well as thick walled glass containing bubbles or specks of colour, and deeply etched pieces.

Marius-Ernest Sabino (1878 - 1961).  Inspired by Lalique and one of his foremost competitors, Sabino also had his own display at the 1925 Paris exhibition.  He was well-known for lighting and produced all the lighting for the Salons d'Automne Art Exhibitions, and created pieces for the ocean liner, the Normandie.  He also made hood ornaments for automobiles, sometimes direct copies of Lalique's mascots.  His work did not have the imagination or flair of Lalique, but his best pieces are figures of stylised women.  The Sabino factory closed down in 1939.