For more than a century, the name Cartier has been known for supplying royalty, the aristocracy and the world's super rich with the highest quality jewels created with the most exquisite craftsmanship and design.

This incredible Columbian emerald was placed in a pendant by Cartier in 1931.  It was given as a wedding present to Anna Case, an opera singer at the Metropolitain Opera, by her husband Clarence Mackay. 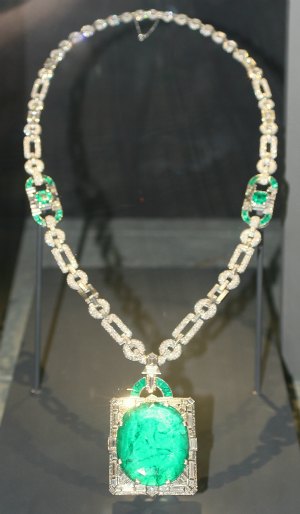 The firm was at the forefront of Art Deco design with Louis Cartier playing an important role in the 1925 Paris Expo, "L'Exposition Internationale des Arts Décoratifs et Industriels Modernes" which gave the style its name.

Louis was vice-president of the committee which organised the "Parure" or Jewelry category at the exhibition and along with Jeanne Lanvin was the only jewelry designer to display alongside the fashion houses instead of within the jewelry pavilion.  Over 150 pieces were showcased at the exhibition and these were at the cutting edge of Art Deco design. 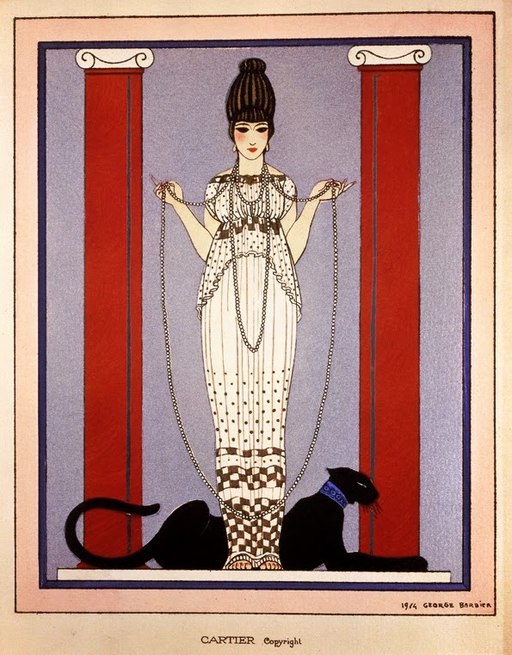 Advertisement for Cartier by Georges Barbier

Individual designers were not permitted to sign their work, and therefore the names of their greatest designers remain largely unknown.  But it was Charles Jacquard who was one of the greatest pioneers of the Art Deco style, along with Paul Follot and George Verger.  Even before WWI Jacquard gave Cartier the edge, designing the most convincing Art Deco pieces.

Louis Cartier had long been influenced by the Far East and the Oriental, but it was the arrival of the Ballet Russes that sent shockwaves through the Art world.  The lavish designs for Scheherazade at the Ballet Russes in 1910 were set against an emerald green backdrop for the harem of the King of India and China, with orange columns, blue doors and draped with fabrics of garish design shot through with gold tread.  Jacquard's imagination was fired along with many other artists by the designs of Bakst at the Ballet Russes, along with the colour combinations of the Fauvist painters Matisse and Derain. 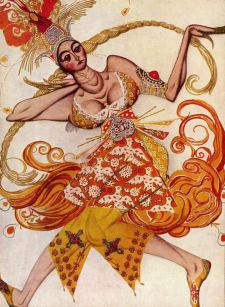 Bakst Design for the Ballet Russes "Firebird" From Wikipedia Commons

In the world of jewellery, this translated into clashing combinations of sapphires with emeralds, amethysts with sapphires, or jade with amethyst.  Gorgeous enamel pieces in Louis's peacock pattern were typical, a blue-green combination, something which was anathema to previous generations of the "blue and green should never be seen" brigade.

In spite of the machine age influences, Charles Jacquard's pieces were light and dainty.  His visits to the Louvre to visit Egyptian, Japanese and Chinese artifacts fired his imagination and he then transformed those images into the functional geometric forms of the day.  But nature was not forgotten, his walks in the Jardin des Plantes put him in touch with the plants, animals and birds which were also motifs of his work.

Links to the Major Fashion Houses

The Art Deco period was a melting pot of the Arts with painters, theatre and fashion designers, interior designers and craftsmen all sharing ideas and influences.  The world's most famous jewelry firm were no different with Louis cultivating connections with fashion houses and designers such as Coco Chanel, Jeanne Lanvin and Jacques Doucet and employing fashion illustrators such as Paul Iribe and Georges Barbier to illustrate their jewelry.

The Art Deco Cartier range included vanity cases, cigarette cases, compacts, desk sets, clocks and watches and a thousand and one other luxury items which were on the point of relegating the jewelry to second place.

Out of the range of most, especially these days, Cartier's Art Deco jewelry and designs had a huge influence on the costume jewelry industry which copied many of the classic Art Deco motifs and styles.

Check out the Art Deco Cartier available on Etsy here.

Keep up with all the latest on Decolish by subscribing to our newsletter.